Invisible Hand is a kinetic sculpture that symbolizes the death chamber used for the Japanese death penalty which is still in practice and has been carried out more than 700 times after the second world war. The executions are currently carried out using three buttons that each executioner presses simultaneously to trigger hanging. However, only one button works and the others are only dummies to lessen the sense of guilt of the executioners by keeping the subject of the act anonymous. This deliberate anonymity can be understood as modern anxiety of commitment to certain acts: People in technologically developed societies evade responsibility by concealing the identity of the act with a machine or other instrument and by distancing themselves from its consequences. The collision of the two witch brooms is meant to express the execution carried out by an invisible hand, a magical intervention whose origin is unknown. As the death chamber is hidden by a wall so that the executioners cannot witness the execution and make any association between their act and its consequence, the metal-framed installation is covered with a white cloth to distinguish and alienate the space from the external human living world.

Now as a man is like this or like that,
according as he acts and according as he behaves, so will he be;
a man of good acts will become good, a man of bad acts, bad;
he becomes pure by pure deeds, bad by bad deeds;

Although the origin of the three buttons setting is unclear, a similar idea can be found in the blank cartridge used for executions of deserters inside military units in WW 1 and 2 in various areas. Members of the firing squad were issued weapons, although one of them contains a blank cartridge, aiming to weaken their sense of responsibility for killing their compatriots. The existence of the possibility that your action might not cause the death of the condemned might comfort their minds, at least it is supposed to. The death penalty has already been abolished in many countries, although in some countries it is still legitimized as the maximum penalty due to the violation of a certain law. But of course, in reality, the law itself cannot execute a convicted criminal on its own. So human intervention is always required, even if the method of execution varies from era to era and country to country. In Japan, judicial hanging was officially introduced at the beginning of the Meiji era (1862~1912), when societal upheaval was taking place in Japan and the traditional system of government was being drastically changed, especially by opening up to the western world. In the new penal code adopted in this era, only hanging was allowed for capital punishment. After WW 2, under the rule of GHQ, the government enacted the Japanese Constitution and underwent major democratic changes, but did not make any major changes to the death penalty as the allies still retain capital punishment in the aftermath of the war.

A condemned criminal cannot know exactly when the execution is scheduled. On the execution day, he/she, in a solitary cell, is called suddenly by several prison officers and marched into the counseling room. A chaplain recites sutras in front of a Buddha statue by his side in the front chamber. Then he is taken to the footboard in the execution chamber and handcuffed behind his back, his legs are also strapped and restrained. He is blindfolded and a rope is placed around his neck. Lastly, he is asked if there is anything left to say. As soon as it is done, a signal is lit, the execution buttons are pressed and the footboard is opened. Five minutes after the doctor confirms the criminal's death, the body is lowered to the floor and placed in a coffin. As the plan of the execution chamber shows, the button room where the executioners are located is separated from the execution room by a wall, making the execution itself invisible to them. The realized anonymity of the execution can be helpful to a certain extent: it may reinforce the impression that "the execution cannot be helped", since the doer to be stopped doesn't exist. Apart from that, the punishment should be differentiated from killing as an appearance, which is the very reason for the punishment, and it cannot be a reenactment of the person-to-person killing. The anonymity allows the authority to execute as if it's carried out by an invisible administrator, which is to say, the law judges the condemned in the name of justice through the machine. It is also relevant to note that the force that makes hanging possible is the gravity and human weight of the condemned, something that no one else can be involved in. 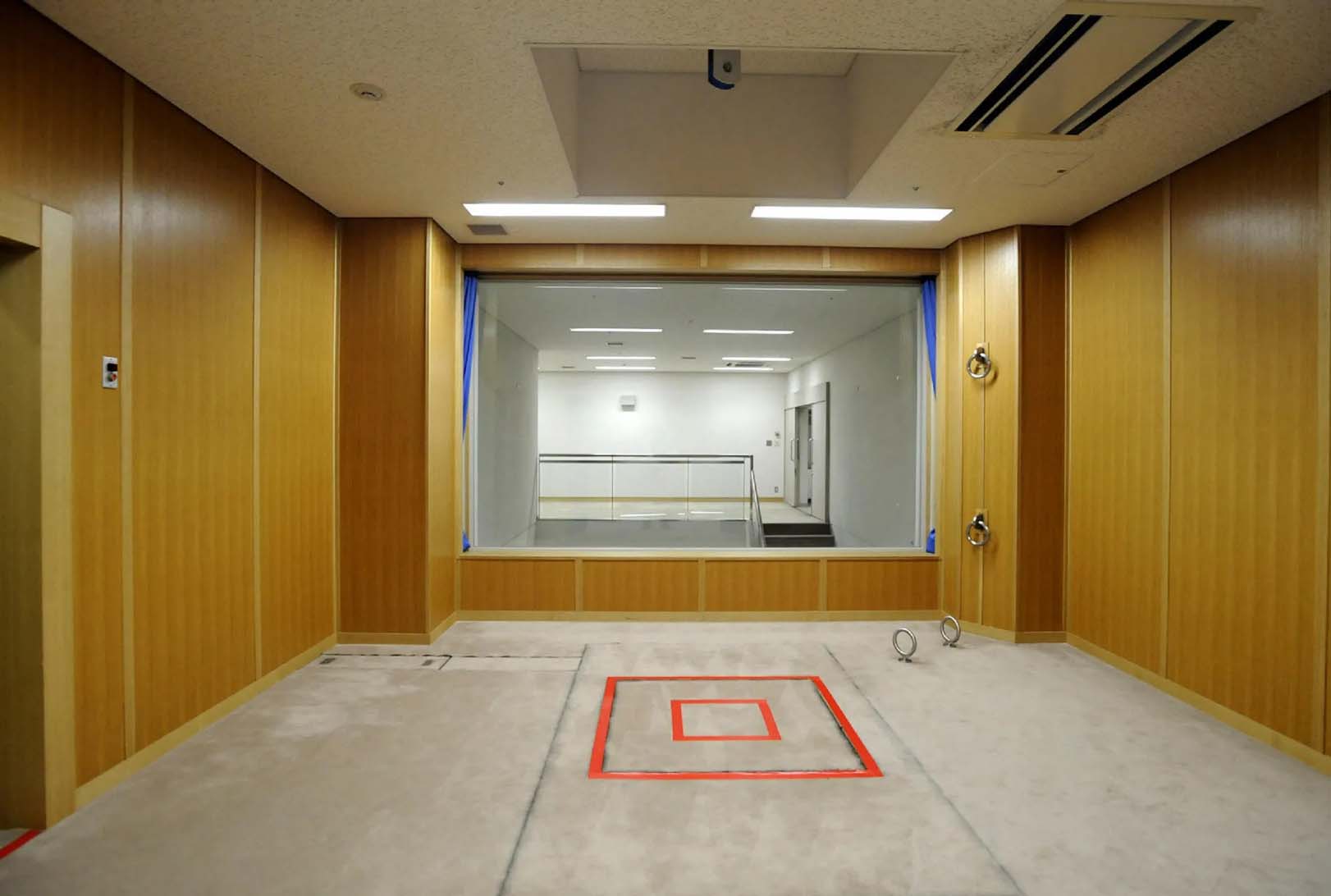 In general criminal law, there are two notions that measure the culpability of a specific crime, "Actus Reus" and "Mens Rea" that are derived from the principles set forward by Edward Coke in his "Institute of the Laws of England" published in the 17th century. In his explanation, there are two elements that must be present in order for a crime to exist, one is "Actus Reus" (guilty act) and "Mens Rea" (guilty mind). "actus non facit reum, nisi mens sit rea" (An act does not make a person guilty unless the mind is also guilty). A crime can only be committed when the criminal act itself and the intention of the person committing the act occur simultaneously. As we know from our everyday senses, there is a difference between accidentally bumping into the shoulder of the person next to you on a crowded train, and deliberately bumping into the shoulder of someone in a carriage with only two people on it. A distinction is made between accidental and intentional acts, the latter being liable and the former not, or at least rarely so perceived. These ideas seem to be based on our common sense, which says that our actions are the result of our intent, and if the intent is not present, not controllable, or not sufficiently formed for some reason, no responsibility is taken for the action. Suppose you are standing in front of a newborn baby. The baby is crying with all the strength they can muster. Can you feel resentment towards the baby and complain to it? No, you can't, knowing that this is a "Natural" phenomenon in the first place, above all the question of whether the baby can understand your anger. Newborn babies can neither be guilty nor punishable due to the lack of the agent that controls the body. The same applies to people who suffer from a mental disorder or illness. In this sense, the recognition of guilt presupposes a dichotomy between humans and nature that is beyond their control. And only a mature and sound "Human" can take the position to be liable. This shows, almost paradoxically, one thing. The recognition of a criminal offense and the imposition of punishment presupposes that one trusts that the criminal is a "human being" capable of controlling his/her body. Just as one has to believe in witchcraft to accuse a witch. 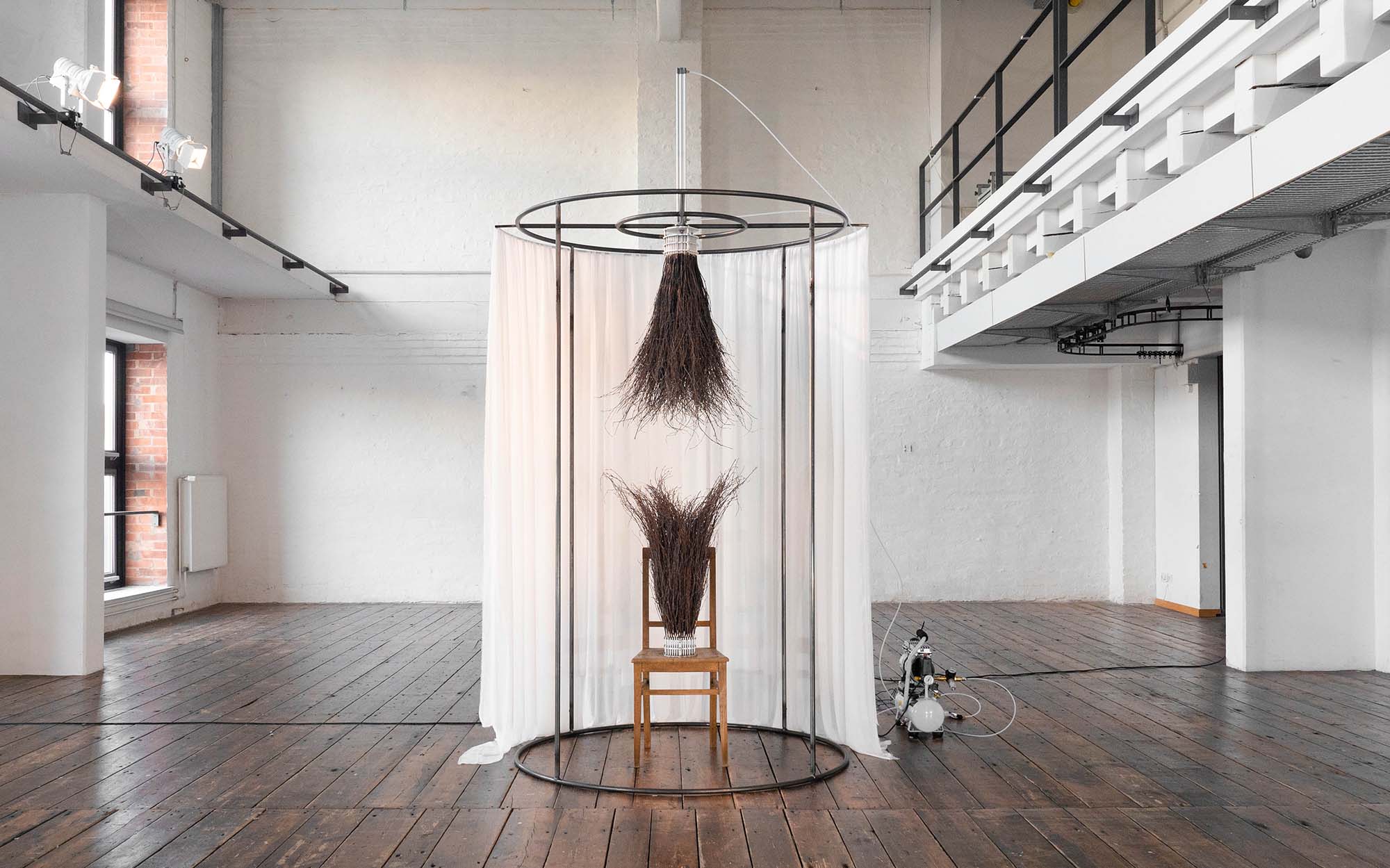 In the current technologically advanced society, numerous interfaces and digital communication tools allow you to transmit your volatile intentions/signals to any location. The place where your intentions occur and the consequences are becoming more distant and unobservable. One could harm a particular system or group of people through cyberattacks or unmanned aerial vehicles (UAVs) without being directly confronted with them. Autonomous systems such as artificial intelligence classify and filter certain information without human control in every decision. What they all have in common is that there is only the result, the phenomenon, in which the proactive human involvement is not visible. The concept of the "Invisible Hand" coined by Adam Smith, often understood as a symbol of free-market capitalism, is expanding its reality away from its original context.

[...] he intends only his own gain, and he is in this, as in many other cases, led by an invisible hand to promote an end which was no part of his intention.

The Invisible Hand is described as ubiquitous to facilitate the smooth functioning of society, especially from the economical perspective. As Marx has subsequently made a critical reference to capitalism concept, pointing out that the deprivation of the intent for the products by laborers would result in their alienation from the object they make. The three buttons used in the Japanese execution can be seen as the application of the Invisible Hand to make use of this "alienation". The aim is for the executioners to be alienated from the act of killing, even though they trigger it. They send a signal in the hope that they are not Connected. To carry out the death penalty in a state where the crime of heinous murder is punishable by death gives rise to such an absurd, almost schizophrenic, twist. This also indicates that there is a possible danger that in the present day, a state or influential organizations will use machines and advanced technology as an invisible hand, shirking its responsibilities as if the subject were absent. The increasing complexity of the connection of a process can act to forget the existence of the "Human" behind it, who is supposed to be the only one who can take responsiblity. 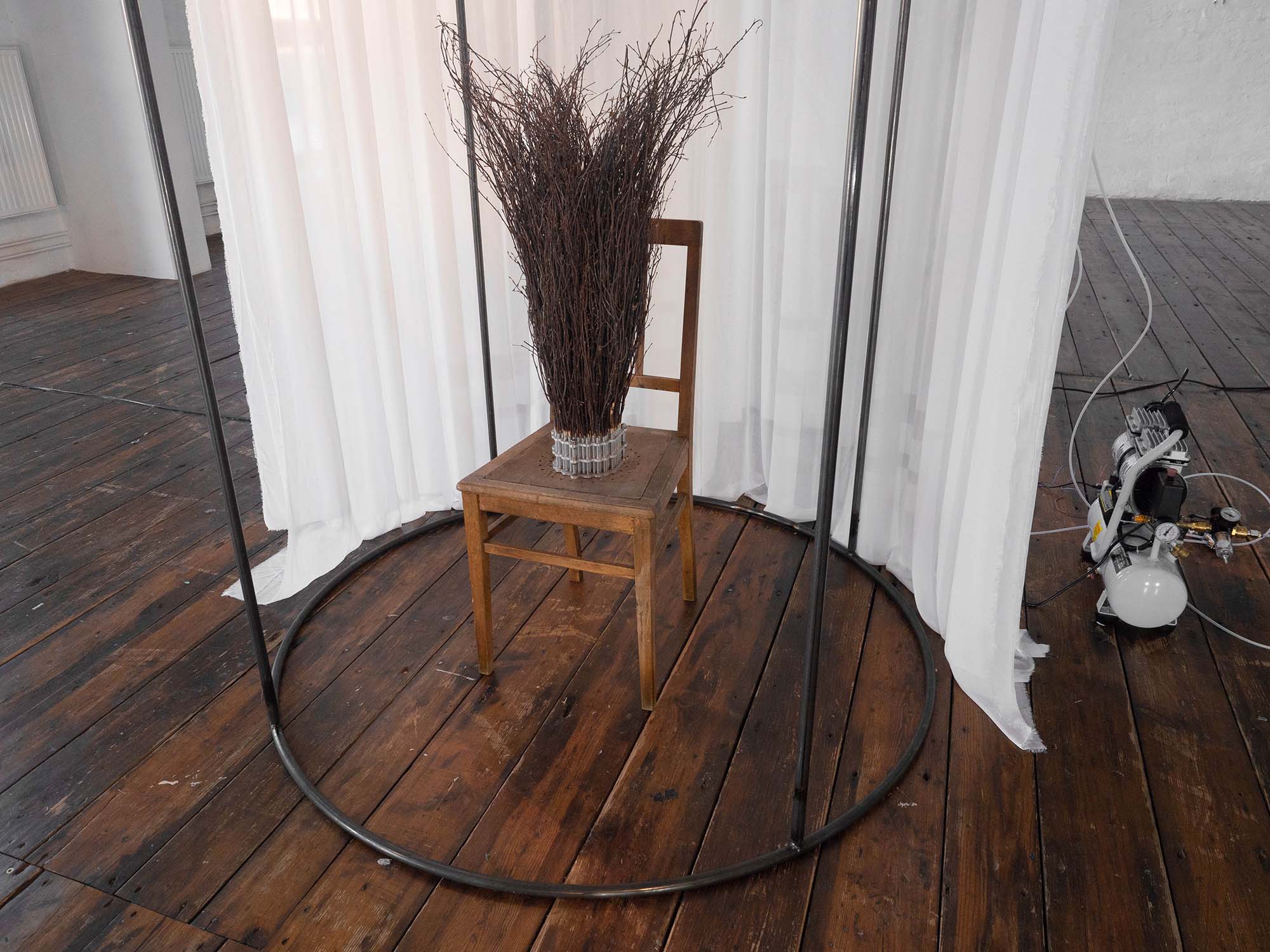 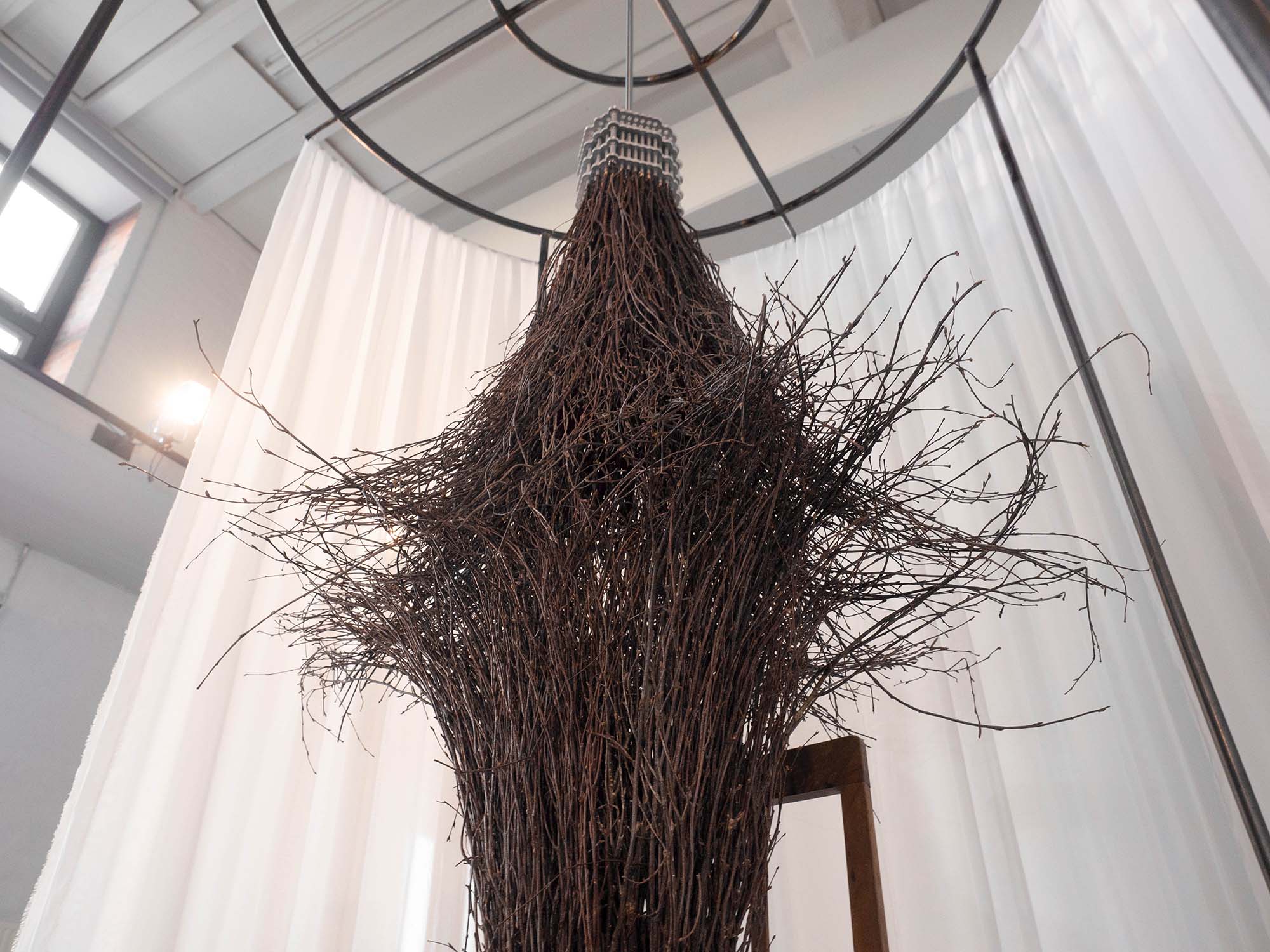